Job Crafting and Off-job Crafting : Well-Being and Satisfaction of Psychological Needs of the DRAMMA-model 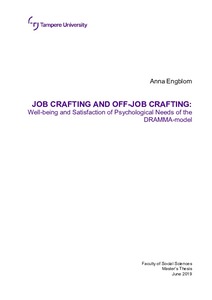 The data was collected via a survey for the research project Making Leisure Work: Leisure Crafting as Active Recovery from Stressful Work. Altogether, 541 Finnish employees from various fields responded to the survey. The majority (85.2%) of the participants were female and their mean age was 49 years. Almost half (47.5%) of the participants reported high school or vocational school as their highest level of education.

The results of this thesis support the idea that an individual is able to prevent the negative effect which high job and home demands have on subjective vitality and mental fatigue by crafting in order to improve the satisfaction of the psychological needs of the DRAMMA-model during job and off-job time. This buffering effect was not found for meaning as an outcome. In addition, the results broaden the understanding of the relationship between job and home demands and crafting. According to the results, high demands are often negatively associated with crafting. Home demands were found to have more relations with job crafting, than job demands with off-job crafting. The results also suggest, that people who craft for a need in the other life domain, usually craft for the same need also in another life domain.

This thesis contributes insights into the DRAMMA-model, crafting based on it, and the relationship between job and off-job time. It is one of the few studies to examine the same phenomenon in two life domains in one study. In future research, a longitudinal study is needed in order to examine the causal relationships between these variables. In addition, other possible predictors and outcomes of crafting should be taken into account. The results encourage to study DRAMMA-based off-job crafting among the non-working population. Based on this thesis, interventions, which acknowledge the important role of home demands as the factor which prevents employees from job crafting and improving their well- being, could be developed.