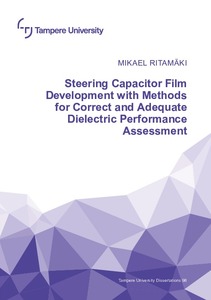 The transition of electric power systems towards renewable generation has created an increasing market for power electronics using film capacitors as one of their key components. Size, weight, and cost reduction can be achieved with better capacitors – an objective achievable with advanced dielectric films. The current state-of-the-art biaxially oriented polypropylene (BOPP) films are already operated close to their fundamental limits, causing a growing demand for next-generation technologies. To perform well when used in a capacitor, a film needs to have a wide range of fundamental and applied properties, all of which should be evaluated during film development to ensure there are no unwanted trade-offs. Power capacitors are used in applications with high downtime costs, e.g. HVDC, thus especially the reliability aspects must be given scrutiny. This thesis work was inspired by the lack of knowledge of the long-term performance of next generation dielectrics, e.g. polymer nanocomposites. Equally important was to fill the gaps in published knowledge of measurement methods to evaluate long-term properties, voltage endurance, and surprisingly, also the dielectric permittivity of thin (≈10 μm) low-loss films. In this thesis, a suitable measurement for each three is presented along with examples of their capability and an approach to applying them to steer film development.

The large-area multi-breakdown method developed in our research group is extended to measurements at realistic operating temperatures, and industrial BOPP films are shown to exhibit an 11–20 % decrease in the DC breakdown strength between room temperature and 100 ◦C. The results align with literature, which supports the validity of the approach. BOPP films made of base materials varying in terms of molecular weight are measured: these films exhibit similar short-term breakdown performance at room temperature, yet at 100 ◦C differences emerge. The difference did not correlate with the reduction of breakdown performance after DC electro-thermal aging, demonstrating the necessity of long-term tests.

Ultimately, the methods developed are fused into one resource-efficient approach to capacitor film development, in which the short-, mid-, and long-term properties are evaluated in three overlapping phases. Reliance on individual performance metrics to steer film development is discouraged: all properties need to be at an appropriate level for a film to perform in application, and there are trade-offs to be managed.