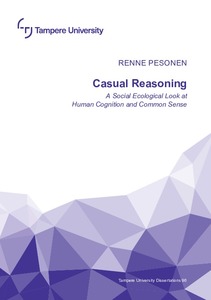 This thesis promotes a pragmatist and ecological approach to human cognition and concepts. Namely, that our conceptual system primarily tracks affordances and other causal properties that have pragmatic relevance to us as embodied and active agents. The bulk of the work aims to show how various research programs in cognitive psychology naturally intersect and complement each other under this theoretical standpoint, which is influenced by enactivist and embodied approaches to cognitive science as well as linguistic pragmatism. The term ”ecological” in the title refers to an approach that emphasizes the interaction of agents and their environment and ”social ecology” means that this includes social interaction between agents and that our material environment is extensively a cultural product, constantly reproduced and altered through cultural behavior.

The extent of the argument is not supposed to be confined to the theoretical psychology and philosophy of science but has somewhat wider motives pertaining to philosophy of language and knowledge. I do not attempt to reform extant theories of cognitive processing and representation (unless arguments against logical computationalism are still considered reformist these days) but to explain the nature of conceptual understanding. I take it that having a concept is principally not having a particular information structure in one’s brain but rather a set of interlocking capacities that support intentional action. In effect, I claim that conceptual understanding should be understood as a cognitive skill and psychological research on concepts should not identify concepts as static information structures but as capacities which are integral parts of procedural knowledge that support skillful know-how in situated action.

Conceptual mental representations deal with information but such information structures are active constructs that cannot be understood without pragmatic and ecological perspective on human cognition. I argue for the claim, earlier proposed for instance by Eleanor Rosch, that contexts or situations are the proper unit that categorization research needs to concentrate on. In accordance with Edouard Machery’s well-known claim, I conceive classical category theories of cognitive science, namely prototype, exemplar, and knowledge accounts, to tap real cognitive phenomena; however, pace Machery I aim to show that they do not form distinct conceptual representations but rather participate in human conceptual capacities as interlocking component processes.

The main problem with theories that emphasize situated direct interaction with the environment is to explain abstract and symbolic reasoning. One theoretically promising way to resolve the issue is to invoke some version of the dual-process theories of cognition; that is, to explain rule-based, theoretical, and symbolic reasoning by resorting to a distinct cognitive system, which is more or less dedicated to those kind of tasks. While dual-process theories seem to license such a move, they can work only as a partial solution because expert scientific reasoning , for example, necessitates implicit skills just like any area of expertise. Second, commonsense reasoning is partly schematic and utilizes theoretical concepts. As an alternative explanation, I offer a hypothesis influenced by philosophical linguistic pragmatism which posits that discursive reasoning is incrementally learned tacit know-how in cultural praxis, which determines how we understand linguistic concepts. This interactive know-how exploits mostly the same cognitive mechanisms as situated and pragmatic procedural knowledge. The explanation has immediate implications for the analytic philosophy of language. When we interpret a text or engage in conceptual analysis, our conscious conceptual interpretation of the associated contents is a product of implicit processes intimately tied with procedural knowledge; in short, explicit know-that is rooted in implicit know-how.