"My name is still Josiane" – Experiences of displacement, peace and conflict in Nakivale refugee camp 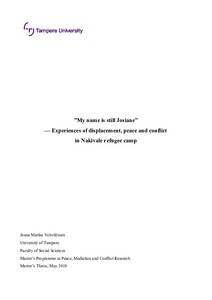 The world of today is characterized by state sovereignty and international relations are based on borders. This system, a “National Order of Things”, associates human beings to nations and territories. Despite this, there are more refugees in the world than ever.

Refugees do not fit in this state of things. They are often given simplified, predefined roles in public discourses, which hardly gives value to their individual histories. This study strives for a comprehensive picture of refugee life by encompassing refugee voices in the core of the study.

This study is an ethnographic interpretation of the everyday life of refugees in Nakivale refugee camp in Uganda. My study investigates how the conflicts of the countries of origin follow refugees to the camp by using the theoretical framework of conflict transportation. Furthermore, I look at the life at the camp through the theory about everyday peace.

The data for the study was gathered in the Nakivale refugee camp in Uganda by doing participant observation, collecting photographic material and conducting nine in-depth interviews. Methodologically, the study exploits thematic analysis.

The main findings of the study suggest that refugees are troubled by various kinds of conflicts in the camp. Some of them resemble the ones in the past, others shift and take new forms. Refugees navigate their ways through the complex jungle of social and economic structures of the camp, pursue various social roles in the communities and face several obstacles to peace. On the other hand, they also apply social practices of building and fostering peace and togetherness in Nakivale.