Triads as a system of collaboration 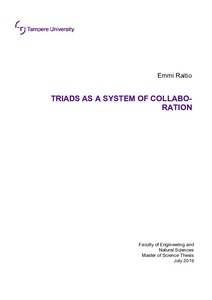 The topic of the thesis were triads, its actors and relationships and collaboration between the actors. The starting point for this thesis is the previously made thesis, since the interviews of it have been used as empirical material of this thesis. The purpose of the thesis was to study, by means of the theoretical and the empirical material, how a triad works to boost collaboration between the actors. The target was to confirm the assumed perspective that a triad can act as a system of collaboration.
This thesis is made as a qualitative research that used conceptual study which based on the theoretical sources. The theoretical framework deals with relationships in triads, collaboration and open and closed systems. As the interviews were conducted in the supply network, this thesis focused especially on triads and on its relationships between the buyer and two suppliers.
The empirical part of the thesis was handled as a case study. Empirical research has been used to analyze the interviews to determine whether the interviews supported the views presented on the basis of the theoretical material. Previous made interviews were held on a predetermined target network and both open and closed questions were used. The examination of the interviews was focused on their most important content for each of the six pairs of interviews. After that, the interviews were started to be analyzed more closely and examined whether they were consistent with the content of the theoretical framework.
At the end of the thesis, conclusions and a summary of the results are presented. In particular, the results emphasize that improving communication can increase trust and commitment and create fellowship. Through it, loose actors will become a part of a smaller network – the triad.