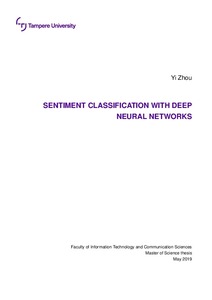 Sentiment classification is an important task in Natural Language Processing (NLP) area. Deep neural networks become the mainstream method to perform the text sentiment classification nowadays. In this thesis two datasets are used. The first dataset is a hotel review dataset(TripAdvisor dataset) that collects the hotel reviews from the TripAdvisor website using Python Scrapy framework. The preprocessing steps are then applied to clean the dataset. A record in the TripAdvisor dataset consists of the text review and corresponding sentiment score. There are 5 sentimental labels: very negative, negative, neutral, positive, and very positive. The second dataset is the Stanford Sentiment Treebank (SST) dataset. It is a public and common dataset for sentiment classification.

Text Convolutional Neural Network (Text-CNN), Very Deep Convolutional Neural Network (VDCNN), and Bidirectional Long Short Term Memory neural network (BiLSTM) were chosen as different methods for the evaluation in the experiments. The Text-CNN was the first work to apply convolutional neural network architecture for the text classification. The VD-CNN applied deep convolutional layers, with up to 29 layers, to perform the text classification. The BiLSTM exploited the bidirectional recurrent neural network with long short term memory cell mechanism. On the other hand, word embedding techniques are also considered as an important factor in sentiment classification. Thus, in this thesis, GloVe and FastText techniques were used to investigate the effect of word embedding initialization on the dataset. GloVe is a unsupervised word embedding learning algorithm. FastText uses shallow neural network to generate word vectors and it has fast convergence speed for training and high speed for inference.

By analyzing the misclassified reviews in the TripAdvisor dataset from the three deep neural networks, it is shown that the hotel reviews with more contradictory sentimental words were more prone to misclassification than other hotel reviews.