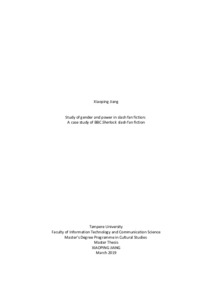 My research aims at exploring how gender identity and sexed body in the dominant/submissive pairing are constructed with BBC Sherlock slash fiction as a case study. Because the construction of the dominant/submissive pairing in slash fan fiction is not merely a passive imitation of the heterosexual gender norms but through the analysis of which, one gains understandings of how power relations work on constructing one’s body and identity. Slash fan fiction, commonly accepted as women’s writing for women, provides substantial materials for the study of power and gender. Furthermore, specific interest is put to study how the writing and reading of slash fan fiction challenges the norms and impacts women in real-lives because resistance has been a main part of the study of power and gender.

Cultural analysis of texts provides the main methodological framework for my study. The data were collected from online website and analyzed through the signification process of linguistic signs which construct the dominant/submissive slash pairing. The theoretical framework, which consists of Judith Butler’s Gender Performativity (1999) and Michel Foucault’s Microphysic of Power (1978), was employed to discuss the findings and answer the research questions.

The findings show that a strong oppositional linguistic choice is used in constructing John and Sherlock’s gender identity and sexed body. This construction reproduces not only the content of masculinity and femininity but also how one is produced and constrained by power relations. My study suggests that the construction of gender identity and sexed body in Sherlock slash fan fiction is the ceaseless enactment and reenactment of gender norms, and through which, the heteronormativity is ultimately confused and denaturalized. My study also indicates that women’s writing and reading of slash fan fiction is, from the perspective of Foucauldian power, the practice of freedom which empowers women to resist the gender normalization that they are always subject to.