The impact of Rohingya refugees on the local host community : the case of Cox’s Bazar in Bangladesh 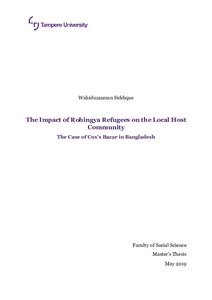 The Rohingya, a Muslim minority group from Myanmar, considered one of the most persecuted minorities in the world. Although the Rohingya’s presence in Myanmar can be traced as long as the ninth century, Myanmar government consider them as an illegal immigrant from Bangladesh. They are denied their citizenship in Myanmar and living in statelessness for a long time. Violence first broke out between the Rohingya and Myanmar military in 1978 after the military launched a large scaled operation called Operation Dragon King that resulted in the killing of tens of thousands of people and over 200,000 people were forced to flee to Bangladesh. Following the first operation, the Myanmar army has operated several more operations on the Rohingya that led the exodus of a large number of people in neighboring countries.

The recent exodus of the refugee from Myanmar started in August 2017, after Myanmar security forces started a new operation with the help of Buddhist militia in Rakhine after a militant group calling themselves “The Arakan Rohingya Salvation Army” (ARSA) attacked government forces. This forced an estimated 700,000 Rohingya people to flee from Myanmar and seek refuge to neighboring Bangladesh.

The aim of this master’s thesis is to evaluate the impact of hosting the Rohingya refugees on the local host community. The study assesses the perception of Rohingya refugees by analyzing qualitative data collected by ethnographic observation. The food price increase, changes in the job sector, house rent increase, movement restriction for local people because of the increase of checkpoints by law enforcement agencies, the inflow of drugs from Myanmar are some of the key impacts that local people are encountering because of the presence of large numbers of refugees.