Artificial skin with sense of touch for robotic hand 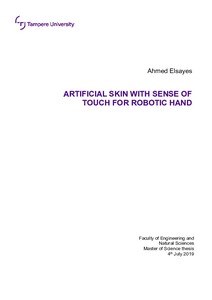 This Master of Science thesis proposes a method to fabricate a soft robotic hand (SRH) with a sense of touch. Electronic skin (e-skin) – flexible and/or stretchable electronics that mimic the functions of human skin – is actively researched and developed for robotic applications (especially humanoid robots), owing to the high demand of robots that can safely interact with humans in the different industrial sectors. E-skin is also in demand for high-quality prosthetics that leverage the advances in brain-machine interfaces.
The emphasis in this thesis is on the fabrication and characterization of an e-skin. The objective of this skin is to give an estimation of the amount of force exerted on it, which is beneficial for the SRH to feedback information about the manipulated object.
We are aiming in this thesis to use fabrication approach of rapid prototyping to fulfill the following characteristics in SRH: actuation, soft touch, and sensation capabilities. Accordingly, we propose using 3D printing to fabricate both hand skeleton and molds to be used for artificial skin casting. Fingers are actuated by driving cables which are extended through inner channels embedded inside the hand skeleton.
The specific goal of this thesis is to compare two different types of touch sensors for e-skin, one piezoresistive and one capacitive. The selected technologies are discussed in detail, and sensors based on these technologies are fabricated, characterized and analyzed comparatively. The results showed the potential of disclosing tactile information by implanting sensors in SRH. With comparing the piezoresistive sensor to the capacitive sensor, the latter exhibited a simpler approach for integration with the artificial skin to develop e-skin because it was feasible to fabricate the e-skin in one step instead of fabricating the artificial skin and the sensor separately. From the perspective of performance, capacitive sensor demonstrated higher efficiency in general compared to the piezoresistive sensor. As an example, the response in the piezore-sistive and capacitive sensor, showed linearity of 5.3% (on a logarithmic scale) 1.8% for both sensors, respectively. Moreover, the signal hysteresis in the capacitive sensor was better with a deviation of 2.7%, compared to 18.2% for the piezoresistive sensor.
Finally, a SRH with integrated touch sensors is demonstrated. This paves the way for further research on utilizing the developed e-skin for objects recognition during hand gripping or designing a closed control loop system for dexterous control over the force of gripping. Moreover, an efficient artificial limb with sensation capabilities can be developed to feedback sensory information to the brain of the patient after being processed by a brain-machine interface.