"How can artists survive as artists?” : a comparative study of the status of artists and cultural policy supporting artists in Finland and South Korea 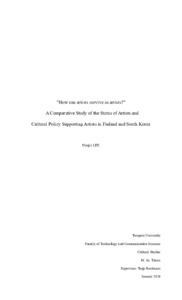 Living as a professional artist requires multiple roles such as a businessman, a social media specialist, a financial expert, an entrepreneur, as well as artists contributing creativity through their artworks. The welfare system for artists in South Korea was suddenly legislated after one screenwriter, Goeun Choi’s death in 2011. However, the law was legislated in a short time, thus, it contains limitations and requires improvements. Furthermore, the two previous Korean governments made ‘Blacklist’ for artists and organizations who were unsupportive for those governments and gave disadvantages deliberately towards artists who were in this ‘Blacklist’. This research investigates to compare the status of professional artists in South Korea and Finland by interviewing artists in both countries. The goal of this thesis is to find out and suggest the direction of cultural policy supporting artists in South Korea through comparison with Finland. I interviewed ten professional artists (five professional artists in each country) by using a semi-structured interview. The interviews were conducted in English for Finnish artists, and in Korean for Korean artists. The collected data from Korean artists were translated into English. According to the results, the deviation of income for Korean professional artists was greater than Finnish professional artists. The grant was an important source of income for Finnish artists which means that Finnish artists were more dependent on the grant and they had more stable income with less deviation of income rather than Korean artists. Korean artists were not aware of grant or support project from the government with lack of information and mistrust towards the government. Meanwhile, Finnish artists were sharing information about grant through communities and organizations and they had trust in the process of grant system from the government. Artists in both countries pointed out the business-minded attitude towards short-term and visible outcome from both governments. Also, they suggested that the government appreciate art and artists.