Media education in the third space: case study of the university occupation and high school protest camp in North Macedonia 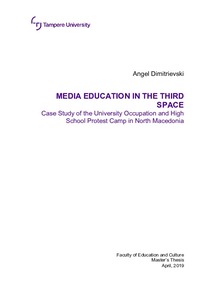 Media education in North Macedonia is still marginal topic in the institutions of the formal system. Young people migrate their usage, interaction and learning about media in places that are out of school and out of home named as third spaces. This master thesis examines the potentials of the North Macedonian student protest environments as places for media education.

The findings revealed that the students exercised the creation of media content inside the protest environments such as writing press releases, media denials or giving interviews. They demonstrated interest for evaluating media professionalism, understanding and reconstructing media narratives and reclaiming media space. Furthermore, they have acquired valuable skills such as critical thinking, debating and soft skills. Their learning was based on peer education, non-formal education and multimedia education which as such identify as different from the formal learning and are specific for a third space.

This research illustrates how students understand, produce and evaluate media inside the third space. The study also suggests how can these practices be further introduced or replicated into formal education, however it sets the path for future research to be conducted in how the schools as formal environments can accept and introduce these changes.