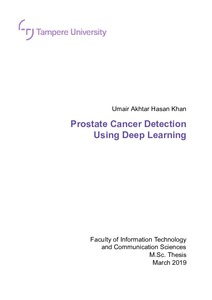 Cancer detection is one of the principal topics of research in medical science. May it be breast, lung, brain or prostate cancer, advances are being made to improve detection precision and time. Research is being carried out on broad range of procedures at different stages of cancer to understand it better. Prostate cancer, in particular, has seen some novel approaches of detection using both magnetic resonance imaging (MRI) and histopathology data. The approaches include detection using deep neural networks, deep convolutional neural networks in particular because of their human level precision in image recognition task.

In this thesis, we analysed a dataset containing multiparametric magnetic resonance imaging (mpMRI) prostate scans. The objective of the research was Gleason grade group classification, through mpMRI scans, which has not been attempted before on a small dataset. We first trained several conventional machine learning algorithms on handcrafted features from the dataset to predict the Gleason grade group of the cases. After that the dataset was augmented using two different augmentation techniques for further experimentation with deep convolutional neural networks. Convolutional neural network of varying depth were used to understand the effects of network depth on classification accuracy. Furthermore, we made an attempt to shed light on the pitfalls of using small dataset for solving problems of such nature.