Breaking off the engagement : a case study about the decision to stand alone in a time of mergers in the Higher Education Sector 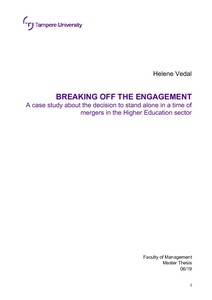 The development in the Higher Education (HE) sector has for the past decade been characterized by structural changes in form of government-initiated mergers. The aim of such structural changes was to enhance the quality by concentrating the resources in fewer but stronger institutions. The signals from the Ministry of Education and Research about such changes was the start of a wave of mergers in the sector, which over a few years resulted in a decrease in the number of Higher Education Institutions (HEI) from 33 to 21. However, not all of the negotiation processes about potential mergers turned out to be successful.

This thesis is a comparative case study that is looking at the decision-making process, and what may have influenced this, towards a decision not to merge. The cases in this study is the negotiations between University of Agder (UiA) and Telemark University College (HiT) and the University of Stavanger (UiS) and Stord/Haugesund University College (HSH). The cases are quite similar when it comes to size and regional standing, but the processes differ in form of time-frame and involvement of internal and external stakeholders. The University Boards were divided in their opinions during the processes but ended in a unanimous vote in the last extra ordinary board meeting. Something has happened during the processes and this study aim to identify critical events and stakeholders that have affected the decision-makers´ decision to terminate the process and by that stand alone in a time of mergers.

The following research question is formulated: Which critical events and stakeholders has affected the decision-making process in the merger negotiations at the University of Agder and the University of Stavanger?

In order to identify such events and stakeholders, I have conducted interviews from representatives in the University Boards at the time of the merger process and conducted a document analysis as a tool in order to be able ask the right questions and to strengthen the information received from the interview. This has formed the base for a process tracing methodology. The theoretical framework is built on two theoretical pillars: decision-making theory and stakeholder theory. Decision-making theory centre around organizational characteristics that may have an impact on how an organization make decisions. These characteristics further form the base for five decision- making models. The second pillar is stakeholder theory, which is important for identifying stakeholders that are important to an organization and how important they are in order to a stakeholder hierarchy.

The empirical data show that the theoretical pillars are quite overlapping as stakeholders have an impact on the perspectives that is characterising the organizational decision-making. The findings also indicate the two processes are quite similar in the beginning of the processes when it comes to who and what have influenced the merger initiate, but that the organizations further have quite different approaches towards the decision. Due to the different approaches, the internal and external factors that have affected the processes also differ, before the processes again share similar characteristics as a result of the impact of similar factors.