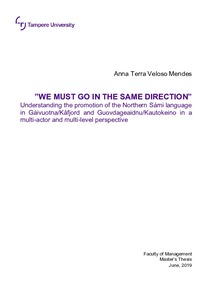 The general endangered status of indigenous languages worldwide is a reality that demands quick action from authorities belonging to different governmental spheres to safeguard their use, protection and further development for the next generations. In view of the complexity of this issue, which stretches itself over public sectors such as health and education, public and private actors have sought to join forces to guarantee the promotion of indigenous languages. Hence, this thesis aims to understand how the existence of different actors within a multi-governance system can enable the promotion of the Northern Sámi language in the Norwegian municipalities of Guovdageaidnu/Kautokeino and Gáivuotna/Kåfjord.
This work was mainly guided by two main theoretical approahces: the governance network theory, allowing the comprehension of the actors that take part into a system in which they interact with one another through the formation of networks and are affected by external factors in each municipality. Besides this, the concept of multi-governance was also used, in order to place these local dynamics into a broader arrangement that depends not only on the local sphere, but also on regional and national actors. In methodological terms, this is a comparative case study led mainly by qualitative data from semi-structured interviews and document analysis.
The investigation found similarities in terms of the type of actors involved in each of the local governance networks, as well as a general common goal in terms of the use and promotion of the Northern Sámi language. The networks are also comparable in size, density and governance mode, in view of the preponderance of the Sámi Parliament as a coordination and major funder, and the role of the municipalities as providers of public services and funds to other institutions in these systems. Despite the more prominent status of the Northern Sámi language in Kautokeino than in Kåfjord, where it is mainly restricted to language courses, Norwegian and Northern Sámi are not fully equal languages, but Kautokeino is still closer to this status. Moreover, in the governance system towards the promotion of indigenous languages, external dimensions such as ethnicity, identity and demographics matter when public service provision and the implementation of policies are to be put forward in contexts dominated by societal conflicts or different ethnical groups.