The relationship between public value and change : Case study on public value creation in relation to the regional government, health and social services reform in Pirkanmaa 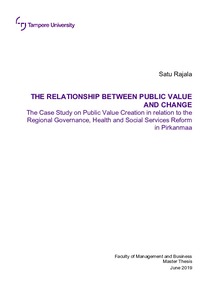 A break first from Traditional Public Administration (TPA) and later New Public Management (NPM) has gradually offered new angles to the governance. For instance, Moore created an analogue to the private value creation, and as a result, the ideology of public value creation has emerged worldwide. Since then, scholars have developed a conceptual understanding of public value. Compared to the NPM public value management embraces post-competitive achievements and broader governmental goals. Yet, the empirical research on public value management, especially in the Finnish context, is rather unknown.

This study examines how a public organization defines the process of public value creation in relation to the government program. The significance of public value arises when discussing health and social services. For this purpose, a case study on the preparation of the regional government, social and health services reform in Pirkanmaa was conducted. The reform of regional government, social and health services was an extensive reform program that Sipilä’s Government introduced in 2015. The reform proposal purposes of removing the duties from municipalities to the new governance units – the counties – that are responsible for arranging services to the larger population base. The preparation of the reform has partly delegated from central governance to the Regional Councils. In Pirkanmaa the preparation progressed well in mutual agreement. For this, among other reasons, Pirkanmaa is a compelling research object.

The design of this study utilizes qualitative research methods. Both primary and secondary data were collected to gain an in-depth understanding. The primary data was collected interviewing seven professionals with different expertise at the case organization, Pirkanmaa2021. To decrease interview biases secondary data was gathered. The analysis of the data was content driven. A table, which identifies elements that contribute to the public value creation, was formulated based on the analysis.

The research findings implicate that the public value creation has been unintentional, a self-guiding process. If the reform is implemented successfully, it can be expected that the process feed value creation to the public, which fosters not only the performance of the public organization but also the citizens’ well-being and regional development. These findings nevertheless are specific to the time and place. Since the Government suddenly resigned prior the parliamentary elections the preparation of the reform was run down. Despite the efforts in Pirkanmaa, it is unsure whether the potential value can be realized as planned. Overall, this study contributes to the literature of public value management, and thus serves as a basis for further research in the Finnish context.