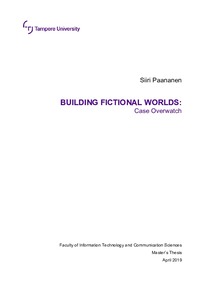 In this thesis, the worldbuilding aspect of the game Overwatch (Blizzard Entertainment, 2016) is explored. Video games provide rich fictional worlds with audiovisual content and require design and development. In this study, the design and creation of fictional worlds, was studied, including how it was done in the case of Overwatch. The game is part of a transmedia universe, in which multiple stories take place.

The method used in this study is a qualitative analysis, which was done using the Grounded Theory Method. The process included collecting data, coding it, writing memos, and creating categories of the themes that arise from the data, and recording and explaining the process.

During the study, nine different worldbuilding themes were constructed, representing the different motivations and goals and processes during the development of Overwatch. The themes are: Development Team's Story, Studying Company Legacy, Inspiration from Other Games, Deciding Guiding Values, Fast Iterative Development, Telling Stories Organically, Focusing on Characters, Trusting the Players, Global and Exotic Locations. A chart of relations between these themes was presented as well, separating them into three levels. This study offers a look into a worldbuilding process of a contemporary video game.