The WoW factor : a study on player motivations in World of Warcraft 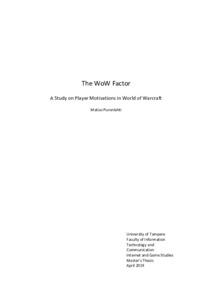 This thesis studies how player motivations in World of Warcraft have changed in the past fifteen years by comparing the oldest and the most recent versions of the game. Bartle’s taxonomy of player types is used to categorize different activities in the game which are then compared between game versions. A survey comprising of 23 items is used to gather data from players of both versions, and the results are validated using factor analysis. Significant findings are reported, and the differences are analysed to understand how the two versions differ in terms of player motivations.

The results indicate that players of World of Warcraft have moved away from casual socializing. This is argued to be affected by game design choices and was reflected on the types of players the game currently attracts. Players of both versions of the game enjoyed playing with their friends, but players of Vanilla put more emphasis on different aspects of social play and exploration.