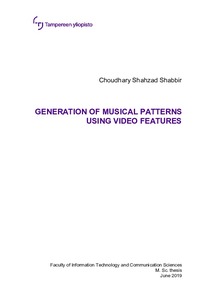 With the growing interest in social media applications, mobile phones have also seen a dramatic improvement in the quality of their cameras. This has caused a surge in the number of videos made by ordinary users, now capable of capturing any scene anywhere. Such videos often suffer from a lack of background music accompanying them. A simple solution is to attach an existing track that is particularly suitable for the video, yet it is also possible to create a completely new one. Research has thus far focused on recommending appropriate tracks for a given video, whereas the concept of automatic music generation is less studied. In any case, the addition of a new music track must rely exclusively on the features of the original video.
In this study, a novel approach has been used to extract data using different video features and generating new music from those features. A desktop application has been designed for this purpose, containing a complete pipeline from importing the video to outputting the final video complemented with new music. To analyze the music quality, a user survey was conducted with roughly 100 participants. The survey contained several distinct videos, each represented in multiple variations with different musical settings. It was revealed that most samples of the newly generated music had enough potential to accompany the video and make it more interesting and meaningful. The results suggest that a more detailed user survey is needed to identify the precise features found appealing by the listeners, exhibiting less variation in musical tempo but more in the instruments applied.