Localization of the Walking Meeting Concept to the Pakistani Culture 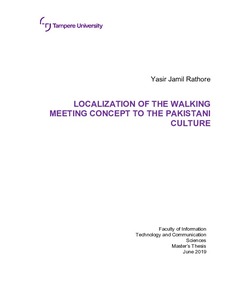 There is no doubt that regular office work is a sedentary endeavor and when done over a course of time can lead to a deterioration in health. While efforts are being made to introduce exercise into the office setting, there is a question mark around the feasibility of such ventures. One such concept is that of walking meetings, which allow lightweight office meetings to be done while walking, preferably outside in the nature. Since most offices do regular meetings, this concept has the promise to allow the chance of exercise without taking a break from office work.
While the concept of walking meetings has been somewhat tested, it hasn’t been tested in non-Western cultures. This has become the motivation behind this research as we test the prototype of a walking meeting mobile app among employees of a middle school in Pakistan. Pakistan is a good candidate since it is a complex mix of cultural elements from regions such as South Asia and Middle East and religions like Islam and Hinduism. Moreover, the Pakistani office environment is classified with high levels of stress and can use a health intervention. We explore some of the aspects necessary for a successful implementation of the walking meeting concept to the Pakistan culture.
The aim was to answer questions such as what the user experiences of the first-time users of the concept prototype are. Through these, we looked at some user requirements for a successful design in the Pakistani culture and tried to translate them into design implications. We found out that conducting walking meetings resulted in a reduction in stress levels and an increase in creativity along with a positive effect on mood. Users were receptive to the idea and were impressed by the value of walking meetings as an alternative to an otherwise entirely sedentary workday. They also seemed keen to use walking meetings as an exercise tool since it requires much less effort as compared to formal exercise and can fit inside of the workday.
We also found out that the role of institutions in establishing the practice of walking meetings, is of the utmost importance. It is therefore necessary to gain proper institution support, along with putting in place the necessary steps to allow institutions to play a useful role. As a result of the research, design implications have been presented for both the walking meeting prototype and a new concept design has been presented for admins, which can help integrating the role of institutions in normalizing health interventions such as walking meetings.