Activism through art : the indigenous narratives of Suohpanterror 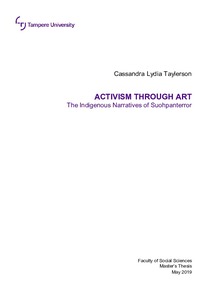 The Finnish state and the Sámi have a somewhat strained relationship. While the Sámi enjoy a fair amount of indigenous rights, there are certain areas and issues that cause tension due to what some might argue are democratic deficits. In the face of such shortfalls, this thesis explores the alternative tool of indigenous activism. The purpose of this research is to examine, through the works of art collective Suohpanterror, the Sámi perspectives on current issues affecting Finland’s indigenous community. This is done by critically analysing four Suohpanterror illustrations, each of which provide a doorway into various themes affecting the Sámi today.

The methods employed for the analysis of this research include textual and aesthetic analysis which rely on individual interpretations of visual material, and are both placed within the approaches of narrative analysis. The methodology is also supported by techniques presented by Schirato and Webb, who emphasize the value of context in visual materials.

The results of my research demonstrate that Suohpanterror’s artworks portray a balance between critique and celebration; critiquing the Finnish state and the colonial practices the group claim it employs, and a celebration of the Sámi culture and identity. The group’s artwork attempts to reclaim Sámi narratives from mainstream perceptions where they are riddled with decades worth of stigma and stereotypes. While it may or may not be an aim of Suohpanterror, the group’s art also plays a significant role as a decolonisation tool, affecting change in spheres where the state cannot.

Furthermore, it is imperative that the Sámi are not simply heard out of obligation, but rather collaborated on with issues regarding their culture. The state of Finland has had a large role in hindering Sámi development from its utmost potential, for example in Sápmi land rights, and thus should take responsibility in forming a more sustainable relationship with its indigenous people.