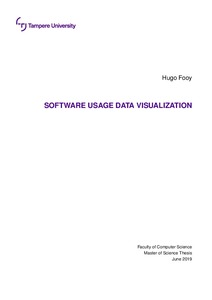 This thesis aims at investigating the adequacy of the Unified Model for Software Engineering Data and its technical framework for developing visualizations of software usage data. Two visual notations were developed using the aforementioned framework and its visualization templates. The data source was provided by logs of the software Kactus2 that had been previously collected. The two visualizations were evaluated both on a semantic level with an ontological analysis (based on the BWW-model), and on a syntactic level with the Physics of Notations. They were also presented to developers of Kactus2 for an additional assessment of their usability and usefulness. The results indicate that the data model and framework are indeed adequate for visualizing complex usage data from Kactus2. Furthermore, the visualizations appear to be both easy to understand and useful (in the sense that they provide insight to the usage of the software) by the developers. Based on these results, we argue that software visualizations of usage data in general - and in particular using the Unified Model for Software Engineering Data - should be studied and developed further as they may help improve software engineering products and processes.