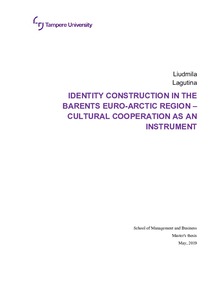 The research represents a multiple case-study and examines three cases at the practical level of cultural cooperation: two cultural research projects with the titles 'The Barents Region: a Transnational History of Subarctic Northern Europe' and the 'Encyclopedia of the Barents Region', and a cultural project not related to the academic sphere of cultural cooperation entitled as 'Barents Spektakel'. The analysis of the official institutional level of Barents cooperation significantly complements the study of practical-level cases. Methodologically, the thesis relies on qualitative content analysis of primary data related to the above mentioned practical cases and the official institutional level of cooperation in the region.