Sport and soft power: the case of sport as a tool of immigrant integration in Sweden 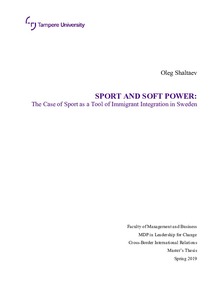 This research examines whether and how the idea of Sweden as a multicultural society and the image of sport as a tool of integration have been used to increase the power of attraction of Sweden in international relations. Do sportspeople with an immigrant background constitute a form of Swedish soft power? There are different initiatives in Sweden aiming to facilitate integration of newly arrived immigrants and refugees into the Swedish society, and sport, reportedly, is becoming a relevant social platform for integration as it breaks down ethnic barriers. These initiatives are also attracting international attention, which is the focus of this research. There is previous research about sport as soft power tool but not much studies concern integrative sports projects or sportspeople constituting a form of soft power. The research on sport as a form of Sweden’s soft power is also limited.

Methodologically, this thesis relies on qualitative content analysis of primary data. In order to get a comprehensive knowledge about the image given about Sweden through sport integration projects and perceptions of outstanding Swedish sportspeople of immigrant background this study used the method of triangulation in data collection. The research analyzed articles published in international English-language media during the period of 2014–2018, four personal interviews conducted in January 2019 with immigrants and officials involved in a sport integration project, and the documentary film Trevligt Folk.

The analysis of chosen primary data showed that although there is no explicit agenda on the part of the Swedish state, the government and its departments, to employ sportspeople of immigrant background in Sweden to promote soft power in international relations, there are elements of soft power in the examined phenomenon. Sportspeople with an immigrant background and various integration projects associated with them are able to attract positive international attention and can thus be said to constitute a form of Swedish soft power. In the analyzed case, soft power is constituted through seven themes which emerged from the analysis of data: sport as a tool of soft power, sport as a tool for integration, New Swedishness, representing Sweden, transnational belonging, personal development for change, and racism and anti-racism.