Separated by a wall – Narratives of Sahrawi Nationalism and Nation-Building 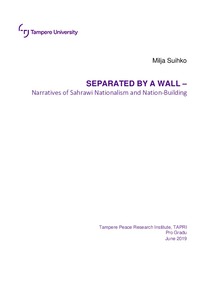 The Western Sahara conflict is one of the most prolonged ones of our time. Finding a resolution to the frozen conflict, which made the news headlines close to 50 years ago, has recently gotten new hope with the ongoing United Nations led peace talks. The Special Envoy for Western Sahara, the former President of Germany, Horst Köhler, has met with all the conflict parties several times and opened the table for a potential new peace agreement in the December of 2018.

Similar to other prolonged tragedies of the humankind, the Western Sahara conflict has as many different storytellers as there are people speaking about the conflict. The situation, which is often being framed as a power rivalry between Algeria and Morocco, two neighboring regional powers in North Africa, proves itself to be another story from the perspective of the so-called Polisario Front “refugee citizens”, the Sahrawis. The Sahrawis, an indigenous nation of the former Spain governed area of the Western Sahara, was given a promise from the UN in 1991 about a referendum, where they would have a say in the destiny of their own land and the independence of the nation.

Unfortunately, the UN was not able to keep that promise. Questions of who are the “real Sahrawis” and who has the right to vote in the referendum became bigger issues than that of the rights of the Sahrawis to decide about their independence. Understandably, the false promises from the international community caused frustration, feelings of defeat and even anger among the Sahrawis. Shared memories, history and traumas of the refugees in the Algerian desert, that are difficult, even impossible, to forget. With a history of prolonged conflict and a profound sense of displacement as an indigenous nation, fundamental questions of identity, independence and views on the future prospects of the Sahrawis seem to be all overcast with sentiments of not having their rights respected or story listened.

This multilayered situation was the framework of the close to existential research puzzle: How has the Sahrawi “refugee nation” survived all these years and how do they recreate themselves via different story forms? The aim of this research was to examine different views and to develop an understanding of the conceptualization of the self-understanding of the Sahrawis – at least the part of it, which is presented to the international audience outside from the community. All in all, in order to formulate some kind of picture of the narrations of the identity understanding and the distant nation-building processes of the Sahrawis, the research material was collected using a combination of several methods. The research material in use included Sahrawi activist interviews in article forms, spoken interviews in documentaries and news and one face to face interview with the Polisario Front official representative in Finland.

Narrative analysis as the methodological choice and the versatile material basis of the research made it possible to elaborate different fractions of the self-understanding of the Sahrawi “citizens”, who have already declared to have their own state, the Sahrawi Arabic Democratic Republic of the Western Sahara. Different fractions of the narrations form a totality, which is in here named as the “story of the nation”. The theoretical framework of the research combined elements of nationalism, state – and nation-building research.

The results showed many shades and colors in the self-formed “story of the Sahrawi nation”, depending on the viewpoint of the storyteller. In the basis of this research, it is safe to state that from the Sahrawi point of view the conflict is not about regional power rivalry. Moreover, it is about the rights and the self-determination of a nation wish-to-be, whose one way of existing is to get their story told and heard. This piece of work added to the contribution to peak behind the curtains of silence about the conflict and to elaborate on, what is going on in the region and why, after all these years, there is no endpoint for the conflict close in sight.