Multiculturalism in Estonia : views of the youth 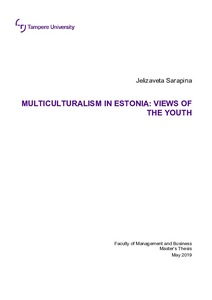 After the collapse of the USSR, Estonia, as an independent state, had to deal with a large population of Russian-speaking minorities, who immigrated or were born there during the Soviet times. The Estonian government had to introduce numerous policies and complete its way from a nation-building state to a multicultural one.

The aim of this research was to find out whether the Estonian Integration Program may be related to the multiculturalism policy, on which it was based. In order to do this, theory of liberal multiculturalism by Will Kymlicka was introduced and compared with the current situation in Estonia. Furthermore, this thesis aimed to find out young people’s attitude towards this term. Qualitative content analysis was applied to analyze 10 interviews with the Russian-speaking side and a ‘mini-survey’ of 10 representatives from the Estonian-speaking side. The Estonian mass media was also analyzed to give the additional information on the present setup in the state.

As one of the aims of multiculturalism is to preserve one’s ethnic identity, it was crucial to find out whether Russian-speakers associate themselves with ‘Russians’. Results have shown that the Russian-speaking minority in Estonia has various ethnic identities – strong Russian, insecure Estonian-Russian and Alternative identities. This fact may speak of assimilation process that takes place in Estonia, as the Estonian-speaking youth did not have adjacent identities. In addition, the results of the thesis have shown that Estonians have a less positive attitude towards multiculturalism, as their aim is to preserve their small nation’s culture and language.

As a result, Estonia still has several aspects to consider and implement in order to be fully included into the number of multicultural states. However, progress in adapting multicultural policies has already been observed.