When is reorientation seen as Europeanization? Sweden's development assistance to Latvia from the 1990s to 2004 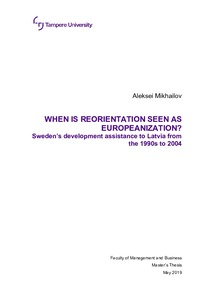 The present study discusses the Swedish policy development assistance to the Baltic states from the 1990s to 2004. The research examines the case of aid-giving policy in the context of the post-Cold War transition of the Baltic states supplemented by the prospective of their integration into the EU. The importance of the research topic is supported by that the issue of foreign aid-giving policy remains open for the analysis and discussion. Such openness allows for the concrete examination of the development assistance practice.

An attempt to put this practice in selected temporal and spatial context of the Nordic–Baltic post-Cold War development is central to the present research. From three Baltic states Latvia has been chosen as an example of the recipient country. With the provision of the example, it is hoped that this research will contribute to the deeper understanding of Sweden as a donor reflecting on the changes occurred in the immediate neighbourhood. The main hypothesis is that Sweden’s aid-giving policy was acting as a tool of Swedish post-Cold War Europeanization through the support of Latvia as one of the Baltic states in transition.

The issue of interests or motives for aid-giving policy is crucial. The range of interests has been revealed as a result from the descriptions on state actor behaviour proposed by the IR theories. In this research, the interests are framed in categories for the content analysis of documents on Swedish development cooperation with CEE countries in which three Baltic ones have been included. The account of the EU enlargement is given here as an applying meaning of Europeanization. The term of ‘Europeanization’ is used in this thesis to define the projection of the prospective of the EU enlargement on Swedish development cooperation with Baltic states and Latvia in particular. The presence of the EU to the state of the external factor has been deliberately limited to show up its indirect impact.

The main findings have confirmed the previous knowledge on that Sweden demonstrated its willingness to support the transition of the Baltic states with their integration into the EU. At the same time, the established analysis offers some new insights in the understanding of the way in which Sweden has been constructing its interests, power, obligations and commitment to the processes taking place in their close vicinity of the post-Cold War Europe.