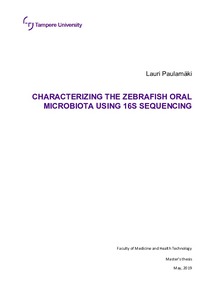 In this master’s thesis I present the methods that was used in the first efforts to taxonomically characterise the zebrafish oral and gut microbiotas from three individual zebrafish. Purpose of the study is to assess the use of the zebrafish as a model organism for studying the oral microbiota and for testing treatment strategies for microbiome disruption in the oral environment. In the study, sequencing of bacterial and archaeal ribosomal small subunit 16S RNA coding gene with Illumina MiSeq sequencer was used, a method that has been established as a standard tool in microbiome studies. Different approaches for creating the sequencing library were tested, of which the Illumina library preparation kit was eventually used for creating the sequencing library. Based on the results, the microbiotas in zebrafish oral and gut environments are rather similar, yet distinguishable. The most abundant microbes in the oral environment were bacteria from the Firmicutes phylum, which belongs to the Peptostreptococcaceae family and the second most abundant family was Aeromonadaceae that is part of the Proteobacteria phylum. In the gut microbiota two most abundant families were the same as in the oral environment, but in the opposite order. In oral microbiota there were higher taxonomic diversity than in the gut microbiota and the relative abundances between taxons were more evenly distributed when measured with Shannon’s index. Based on these results, the potential of the zebrafish for modelling oral microbiota seem promising.