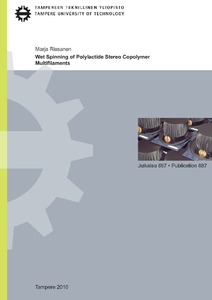 Polylactide is biodegradable and bioresorbable polymer which is used in fibers, packaging, and medical applications. The main method to manufacture polylactide fibers is melt spinning. In this process a molten polymer is extruded through a spinneret and polymer jets are cooled and winded. During the heating the polymer is exposed to a high temperature which can cause a thermo-oxidative degradation of the polymer, and it can be observed in a decrease of molar mass. Furthermore, heat-sensitive additives cannot be added to the polymer melt. During wet spinning polymer is not exposed to the elevated temperature. In this process the polymer solution is extruded through the spinneret, and the filaments are coagulated in a spin bath containing non-solvent of the polymer.

The aim of this thesis was to describe the manufacturing process of wet-spun polylactide stereo copolymer multifilament fibers and to study the filament properties. The first step was to study the solubility and phase separation properties of polylactide stereo copolymers. According to this study dichloromethane was chosen for polymer solvent and methanol and ethanol for non-solvents to the further wet spinning studies. The effect of spin drawing, hot drawing and protein-loading on the physical and mechanical properties, and hydrolytic degradation was examined.

The filaments had a skin-core structure which is typical for wet-spun filaments. This structure was more distinct with poly(L/D-lactide), L to D ratio 96/4, filaments, and the phase separation ability of this polymer was observed faster than that of poly(L/DLlactide), L to DL ratio 70/30. The increase of the spin draw ratio up to 7.0 improved the tensile strength of filaments. The further increase of the spin draw ratio decreased the tensile strength due to the overstretching of polymer chains. Hot drawing was performed just above the glass transition temperature of polymers. It increased also the tensile strength of the filaments, but hydrolytic degradation rate became slower because of the increased degree of crystallinity. The protein-loaded filaments were more porous than the unloaded filaments due to the probe sonication of the polymer solution. The mechanical properties were also lower compared to the unloaded filaments.

Despite the mechanical properties of the wet-spun filaments were not as high as the normal textile fibers, they are sufficient, for example, for the non-woven production. The diameter of the wet-spun filaments was as lowest about 10 μm, and this size is suitable, for example, for tissue engineering. The described manufacturing method is practical for the small-scale filament production.