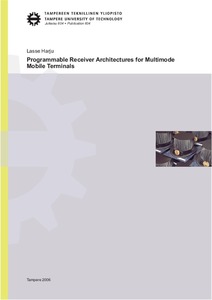 This thesis considers the design of a programmable baseband receiver platform for WCDMA and OFDM mobile terminals. The design challenges introduced by the evolution of wireless systems are highlighted and design methodologies deployed in the platform development are introduced. The receiver algorithms of WCDMA and OFDM receivers are summarized and potential processor based architectures for implementing these algorithms are studied.


The platform architecture and the programming interface constitute a template baseband receiver architecture that can be employed in WCDMA and OFDM receivers. The hardware and the software can be fine tuned to the target application without affecting each other as long as the programming interface is kept unchanged. Thus, the platform enables effective reuse of existing hardware and software implementations.