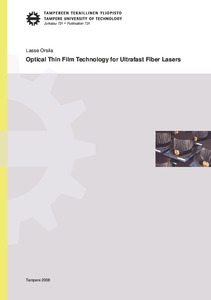 This thesis investigates novel dispersion compensation methods for mode-locked fiber lasers and the dynamical properties of ytterbium and thulium-holmium gain materials. The emphasis is on dielectric thin film structures and their integration into fiber cavities to control laser performance.

A Gires–Tournois interferometer (GTI) made with electron beam evaporation was used for the first time to compensate for the dispersion of a fiber cavity and thus achieve ultrashort mode-locked pulses. Another thin film dispersion compensator, a Fabry-Pérot etalon, demonstrated in a mode-locked fiber laser, allowed for continuously tunable short pulse operation of an ytterbium fiber laser over a broad wavelength range.

In addition to dispersive thin film structures, the thesis also presents a new type of dichroic coating deposited directly onto an optical fiber end. The dichroic coating acts as an output coupler and pump combiner, simultaneously. This enables laser cavities which are substantially shorter than would be possible with conventional fiber components. The compact all-fiber ytterbium fiber laser presented had a record high fundamental repetition rate of 571 MHz with ultrashort, 572 fs, pulses.

The energy level scheme of ytterbium and thulium-holmium gain materials was studied for the first time in this thesis by analyzing the laser relaxation oscillations. Both materials exhibited a change in transition mechanism from three-level to four-level laser operation in the long-wavelength tail of the gain bandwidth.