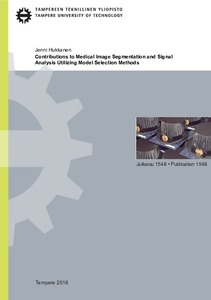 This thesis presents contributions to model selection techniques, especially based on information theoretic criteria, with the goal of solving problems appearing in signal analysis and in medical image representation, segmentation, and compression.

The ﬁeld of medical image segmentation is wide and is quickly developing to make use of higher available computational power. This thesis concentrates on several applications that allow the utilization of parametric models for image and signal representation. One important application is cell nuclei segmentation from histological images. We model nuclei contours by ellipses and thus the complicated problem of separating overlapping nuclei can be rephrased as a model selection problem, where the number of nuclei, their shapes, and their locations deﬁne one segmentation. In this thesis, we present methods for model selection in this parametric setting, where the intuitive algorithms are combined with more principled ones, namely those based on the minimum description length (MDL) principle. The results of the introduced unsupervised segmentation algorithm are compared with human subject segmentations, and are also evaluated with the help of a pathology expert.

Another considered medical image application is lossless compression. The objective has been to add the task of image segmentation to that of image compression such that the image regions can be transmitted separately, depending on the region of interest for diagnosis. The experiments performed on retinal color images show that our modeling, in which the MDL criterion selects the structure of the linear predictive models, outperforms publicly available image compressors such as the lossless version of JPEG 2000.

For time series modeling, the thesis presents an algorithm which allows detection of changes in time series signals. The algorithm is based on one of the most recent implementations of the MDL principle, the sequentially normalized maximum likelihood (SNML) models.

This thesis produces contributions in the form of new methods and algorithms, where the simplicity of information theoretic principles are combined with a rather complex and problem dependent modeling formulation, resulting in both heuristically motivated and principled algorithmic solutions.