From Boiler to Atmosphere: Effect of Fuel Choices on Particle Emissions from Real-Scale Power Plants 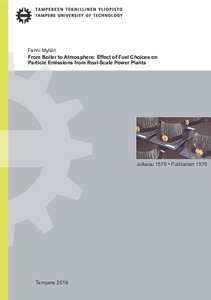 Fossil fuels, coal and oil are used for energy production around the world. Combustion of these fossil fuels produces gases and particles that aﬀect air quality and climate. The CO2 emissions can be decreased by substituting fossil fuels with biomass and this substitution can further aﬀect the particle emissions of the power plants. This thesis focuses on characterising particles of real-scale power plants with various fuels, from combustion to atmospheric dilution. The studied power plants were a combined heat-and-power (CHP) plant (combusting coal and a coal – wood pellet mixture) and a heating plant with three fuel mixtures. The particles were characterised mainly based on particle number size distribution and number concentration, using aerosol sampling from the superheater area of the boiler of the CHP plant, the stack of the CHP and the heating plant and the atmosphere surrounding the CHP plant.

Measurements for the aerosol samples taken from the boiler indicated that the particles from the combustion of coal and the mixture of coal and industrial pellets had already formed in the boiler. The formation of the particles was studied by changing the dilution of the aerosol sample and by comparing the electrical charges of the particles in the boiler. The coal-combustion particles were around 25 nm in diameter. The addition of 10.5% industrial pellets to the coal caused the formation of a second particle mode, the soot mode (120 nm in diameter), in the boiler. In the heating plant, the addition of light fuel oil to heavy fuel oil had a similar eﬀect on the oil-combustion particles. The particles from the combined coal-and-pellet combustion agglomerated and coagulated before reaching the sampling point in the stack. These processes, combined with the eﬀect of an electrostatic precipitator, resulted the mean diameter of the particles to be 80 nm. Further, the ﬂue-gas desulphurisation and fabric ﬁlters lowered the particle number concentrations. The particles measured inside the stack were also observed from the atmosphere before they were diluted to background concentrations. The ﬂue-gas plume was measured in four occasions, in three wind directions and with four ﬂue-gas cleaning and fuel combinations. These measurements resulted in the observation of a new particle formation in the diluting plume. In the atmospheric measurements, the concentrations of SO2 and CO2 played an important role in measuring the dilution process. In the heating-plant experiment, the characterization of oil-combustion particles showed that the lower fuel sulphur content decreased the particles’ hygroscopic growth factors.

The atmospheric primary emissions of coal-ﬁred power plants can be eﬀectively lowered through ﬂue-gas cleaning technologies. In this study, ﬂue-gas cleaning was shown to aﬀect the ﬂue gas’s particle number and the mass concentration as well as its black carbon concentration. The cleaning did not prevent new particle formation in the ﬂue-gas plume in the atmosphere, but it did reduce the potential for particle formation.