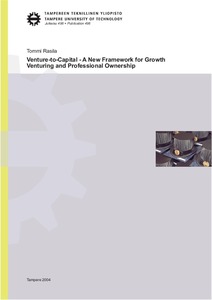 The objective of this study is to build a theory of growth venturing as a practical phenomenon, contributing to the understanding of all interested parties: the owners and managers of the ventures, if not one and same person, also their financiers and other aides, such as business angels and advisors as well as the potential buyers of the companies and government policy makers, making decisions that shape the business environment.


The study starts by assessing the current theory of growth venturing by defining the elements it requires - Entrepreneurship, Equity Financing, Ownership and Management. Based in this extensive concept-analytical study, the theory of Venture-to-Capital as a new framework is synthesized from existing theory. The framework includes the operating modes, milestones and actors of the Venture-to-Capital arena. The reasons contributing to the need for the new discipline are also analyzed.


Next, the study seeks to modify and improve the theory of Venture-to-Capital by assessing and categorizing the operating models of both prevalent and emerging actors in the Venture-to-Capital arena. This empirical effort is based on 14 case studies as well as the analysis of the five existing actor classes - Advisor, Incubator, Seed Venture Capitalist, Business Angel and Business Angel Network. It is noted that due to the development and the change in the requirements for the V2C actors from the market and the target ventures, new kinds of actors have emerged alongside the traditional ones. As a result an improved, evolutionary classification of six different Venture-to-Capital actors is presented.


Further theoretical and practical implications of the findings are also presented, including a normative model of a V2C actor.