On the Surface Interaction of Aerosol Particles 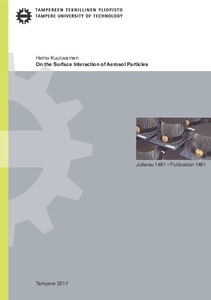 Aerosol particles interact with surfaces in different environments and applications. The knowledge of fundamental surface interaction phenomena can be used to investigate the structural properties of particles, describe the performance of different instruments, and develop new applications. In this thesis, particle rebound from a surface as well as the transfer of the electric charge during rebound and resuspension were studied. The research was based on the experimental and numerical characterization of these surface interaction phenomena. Along with the fundamental understanding obtained for the interaction between aerosol particles and surfaces, new methods were developed and applied for speciﬁc aerosols, such as fungal spores.