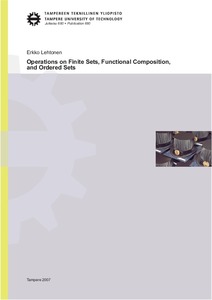 
The simplest example of C-subfunction relations is obtained when C is the smallest clone I of projections on A. Forming I-subfunctions corresponds to simple manipulation of variables, namely addition and deletion of dummy variables, permutation of variables, and identification of variables. None of these operations increases the number of essential variables, and only variable identification may decrease this number. We study more carefully the effect of variable identification on the number of essential variables of operations on finite base sets. We then study certain order-theoretical properties of various C-subfunction partial orders defined by larger clones C on finite base sets A. We are mostly concerned about the descending chain condition and the existence of infinite antichains, and as it turns out, these properties on the defining clone C.


Homomorphisms of labeled posets (or k-posets) are applied in our analysis of subfunction relations defined by clones of monotone functions. The third part of this thesis is a study of the homomorphicity order of finite k-posets on its own right. We establish that this order is a distributive lattice, and furthermore, it is universal in the sense that every countable poset can be embedded into it. This result implies universality of the subfunction partial orders defined by clones of monotone functions on finite sets of more than two elements. In this way, we also obtain a new proof for the well-known universality of the homomorphicity order of graphs.