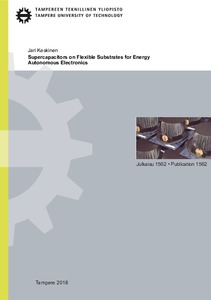 Electrical energy storage facilitates the use of electrical devices also when there is no full-time external energy source available. Electrical energy can be stored chemically as in batteries or in electric field as in capacitors. Supercapacitors are electrochemical cells in which energy is stored in electric field in the interface between electrode surface and electrolyte. Typically supercapacitors have higher power density but lower energy density than batteries. In general, supercapacitors have longer lifetime and they can be used in a wide temperature range.

The goal of the research reported in this thesis was to study and develop small, flexible, environmentally friendly supercapacitors for e.g. Internet of Things or wireless sensor network applications, with emphasis on inexpensive materials. A second focus of the research was on scalable solution based processes which are similar to mass printing making large-scale production feasible. A further goal was to avoid toxic materials in order to enable disposable or incinerable devices.

The supercapacitors were fabricated on paperboard or polymer substrates. Metal foils, silver ink and graphite ink were used as current collectors, activated carbon or polypyrrole as electrode material and paper as separator. Biopolymer chitosan was used as electrode binder and also demonstrated to work as a separator. In most experiments aqueous sodium chloride acted as electrolyte. Typically the area of the electrodes was 2 cm2. A monolithic structure facilitating supercapacitor fabrication by a solution process method was developed.

The capacitance values of the supercapacitors were of the order of 0.1-0.5 F. Depending on the current collector material and dimensions, the equivalent series resistance ranged from below 1 to above 30 . Self-discharge properties for various types of supercapacitors were defined: still after 30 days over 50 % of the charged energy remained. Energy efficiency values were up to 96 %. These numerical values are adequate for energy storage components in practical application and thus show that the goals set for the research were reached.