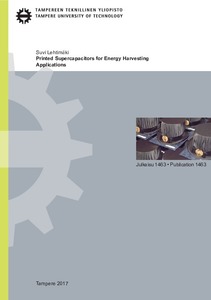 Energy harvesting from ambient sources such as light or vibrations is a promising method for powering distributed and ubiquitous electronics. Harvesting requires an intermediate energy storage, for which supercapacitors are well suited due to their long cycle life compared to batteries. Moreover, supercapacitors can be prepared from non-toxic materials with printing methods, enabling their use in many applications.

This thesis analyzes different types of solution processed supercapacitors prepared using different materials, fabrication methods and architectures, and their use in energy harvesting. Supercapacitors were prepared from the conventional material, activated carbon, as well as novel materials: carbon nanotubes and conducting polymer composites. Layers were deposited by doctor blade coating and screen printing, and in the case of conducting polymers, also electrochemical deposition. Neutral aqueous electrolytes were used in the supercapacitors.

Carbon nanotubes (CNTs), which have both conductivity and a high surface area, offer the possibility of preparing the supercapacitor electrodes with only one layer, without a separate current collector. In this work, CNT supercapacitors were prepared from blade-coated electrodes, and capacitances of 6 mF/cm2 were achieved. The equivalent series resistance (ESR) was large, 80 Ω, probably due to the large amount of dispersant polymer needed in the ink. The other novel material studied in this work was a composite of poly(3,4-ethylenedioxythiophene) (PEDOT) and reduced graphene oxide. Symmetric supercapacitors prepared from electropolymerized layers on plastic substrates yielded 18 mF/cm2 capacitance and 25 Ω ESR. It was found that the reduced graphene oxide accounts for approximately 30% of the capacitance of the composite, although morphology changes due to its incorporation have an effect as well.

Screen-printed supercapacitors were prepared from a graphite ink as a current collector and an activated carbon based ink as the active layer. The effect of varying layer thicknesses on the device properties was examined in detail. On average, capacitance of 150 mF/cm2 and ESR of 10 Ω was achieved and the current collectors were found to be the main source of the ESR. The effect of the maximum voltage on the device properties was also tested, and while a higher voltage yielded a higher capacitance, it also led to a higher leakage current as well as quicker device degradation. Based on these results, 1.0 V was found to be a good compromise for the maximum voltage of the supercapacitors.

Energy harvesting was demonstrated with a printed radio-frequency harvester. Using two 450 mF supercapacitors in series, a 1.2 V voltage-control circuit could be operated for over 10 hours with a steady output. Operating an electrochromic display was also demonstrated with a supercapacitor charged through a solar cell module under ambient lighting.