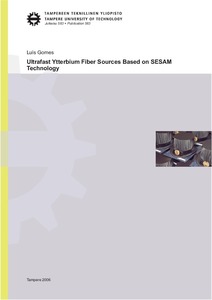 In this thesis we report on the experimental studies on the generation of ultrashort pulses from mode-locked ytterbium fiber lasers operating at 1 mm wavelength region. Different fiber cavities, all with a linear geometry, were studied. The passive modelocking investigated here was based on SESAM technology. GaInAs and GaInNAs material systems were explored as saturable absorbers. The results obtained with the GaInNAs SESAMs demonstrated that these reflectors can be faster than the mirrors made of GaInAs. This allowed shorter optical pulses to be achieved from ytterbium fiber lasers with saturable absorbers based on dilute nitride, and suggests that using dilute nitride material system allows avoiding post-growth actions needed for reducing the absorption recovery time and, therefore, making SESAM technology more efficient and cost-effective.The cavity configuration which was studied allowed for tunable pulse operation in three adjacent wavelength bands which cover the spectral range from 977 to 1115 nm. The typical pulse width was in the picosecond range with an average output power of tens of mW. The amplification of these pulses in a cladding-pumped fiber amplifier up to average power over 700 mW has been demonstrated, that corresponds to a peak power of 6 kW and a pulse energy of about 23 nJ. Using a grating pair for dispersion compensation inside the cavity, pulses as short as 1 ps were achieved. External pulse compression was also used resulted in 340 fs duration pulses.The generation of mode-locked pulses in a cavity without dispersion compensation was also studied using a short-length cavity with a doped fiber placed inside a loop mirror. The self-starting mode-locked operation with overall normal cavity dispersion was initiated and stabilized with optimized high-performance SESAMs.In another cavity using the dispersion compensation by a Gires Tournois interferometer (GTI), the reduction of the pulse duration by an order of magnitude was achieved, as compared to the pulses obtained without dispersion compensation. To conclude, the main result of this work is an extensive study of SESAM technology for mode-locking of fiber lasers in the 1 mm wavelength region. The results which should be emphasized are-the demonstration of GaInNAs SESAMs in short-wavelength region (