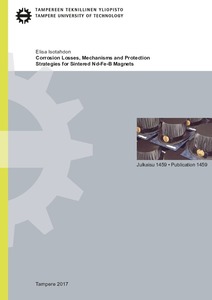 The need for permanent magnets has increased with the advances in modern renewable energy technologies and electric vehicles. Sintered Nd-Fe-B magnets are, so far, the best alternative for light constructions, since their energy density is superior compared to other permanent magnet materials. They have good magnetic properties, but the stability under elevated temperatures and in humid environments is limited.

The aim of this thesis was to gain a deeper understanding of the corrosion behavior of sintered Nd-Fe-B magnets and to provide a basis for selecting a proper corrosion protection method. Typical methods for the improvement of the corrosion resistance include cobalt allo ying and the use of coatings and surface treatments, all of which were investigated in this work. Furthermore, the objective was to correlate losses in the magnetic flux with the weight losses during the corrosion tests.

The microstructure of the magnets was characterized before and after the corrosion tests to reveal the degradation mechanisms in different environments. Accelerated cabinet testing and electrochemical measurements were utilized. Electron microscopy studies were used to discover the mechanisms and to estimate the relationship between accelerated corrosion tests and applications.

Corrosion tests were performed in the presence of water as vapor and pressurized vapor, immersed in water, in salt spray and under immersion in saline solution. Pressurized water vapor was found to be the most aggressive corrosion environment among the studied cases. It introduced both inter-granular corrosion, i.e., pulverization, and general corrosion of the Nd2Fe14B phase. Cobalt alloying inhibited the pulverization tendency of the magnets. Pressurized heat-humidity tests measured well the tendency for pulverization but did not reveal the tendency for general corrosion of the magnetic phase. Immersion in pure water introduced a new type of degradation mechanism in the microstructure of sintered Nd-Fe-B magnets, where the matrix phase of the magnet was preferentially corroded.

In mild heat-humidity environments, the uncoated magnets benefit from modified surface finish so that the initiation of corrosion on the surface of the magnet is hindered. In the case of coated magnets, the principal factor influencing the corrosion performance was the quality of the metallic coating.

The most efficient method to evaluate the overall corrosion performance of a permanent magnet material was to perform accelerated tests so that the specimens are magnetized and the losses in weight and magnetic flux are measured simultaneously. The results from the corrosion tests on magnetized specimens showed that the microcrystalline anisotropy of the sintered magnets resulted in heterogeneous corrosion, where the pole faces degraded preferentially to the side faces. However, the geometry of the magnet affected the resulting losses also by another way – the self-field of the magnet contributed to the second stage of corrosion, i.e., the detachment of the magnetic grains when the gluing grain boundary phase had dissolved. Due to the differences in the initiation rate of corrosion, the measured flux losses varied between parallel specimens. However, the corresponding percentage weight losses were always smaller than the ﬂux losses indicating that the flux losses do not originate from the material losses only.