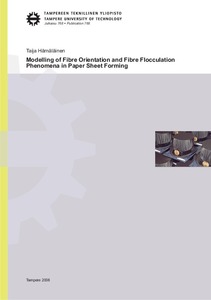 The quality of the paper produced can be characterised by numerous properties, such as roughness of the surface or dimensional stability under printing process, to mention but a few. Typically, the paper sheet properties depend on the whole papermaking process starting from stock preparation, and ending with the finishing units. Different paper grades have, naturally, different quality requirements, but two properties, basis weight and fibre orientation, are essential to all of them, since these properties determine the basic structure of the product.

The basic sheet structure, i.e. the fibre network and the solid material distribution, is determined mainly in the wet end of the paper machine, namely in the headbox and in the forming section. The flocculated state of the suspension in the initial drainage zone, as well as the orientation of fibres, are both inherited to the end product. The wet end processes are controlled by fluid mechanics, and thus, this thesis focuses on the investigation of the local phenomena by means of computational fluid dynamics (CFD). Modelling of fibre suspension flows has traditionally been based on a one-phase flow approach. In many circumstances the suspension can be treated as homogeneous generalised Newtonian flow - or even as pure water - but when the focus is set to the forming of the fibrous structure, a more advanced simulation approach is required.

This thesis is concerned with two essential properties, i.e. fibre orientation and fibre flocculation, which are modelled separately. The orientation is modelled by a Fibre Orientation Propability Distribution (FOPD) model. Unlike previous studies, in this thesis the FOPD simulation has been performed in a two-dimensional headbox slice channel, and includes the free jet. Flocculation is modelled with a completely novel approach in pulp and paper industry, a Fibre Floc Evolution (FFE) model, which is based on a population balance. In the FFE model the fibre suspension has been modelled as turbulent Eulerian two phase flow. The physical nature of flocculation process is taken into account, that is, flocs can coalesce to form bigger flocs, and they can break-up into smaller ones.

The numerical results of the FOPD simulations revealed new phenomena and proved the importance of including the free jet in the simulations, since the state of the orientation inside the slice channel does not characterise the situation in the jet reliably. The FFE model turned out to be a solid basis for the fibre flocculation modelling, since it is capable to predict real floc sizes. The model parameters have been validated with one geometry, the turbulence generator pipe. However, the current FFE model is capable to predict, at least qualitatively correctly, the evolution of the floc size distribution in the slice channel as well. In addition, the floc size evolution in the initial drainage zone of a Fourdrinier type of forming section is presented for three different jet-to-wire speed ratios. Although these results can not directly be used for predicting sheet formation, they provide an interesting insight into flocculation phenomena occuring during the forming process.