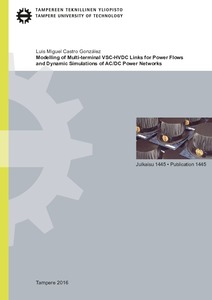 Power transmission systems are expanded in order to supply electrical energy to remote users, to strengthen their operational security and reliability and to be able to carry out commercial transactions with neighbouring power grids. Power networks successfully expand, at any time, by incorporating the latest technological developments. A case in point is the current growth of electrical power grids, in terms of both infrastructure and operational complexity, to meet an unprecedented upward trend in global demand for electricity. Today’s expansion of the power grid is being supported, more and more, by power electronics, in the form of flexible AC transmission systems and HVDC systems using voltage-sourced converters. The latter option, in particular, has been developing exceedingly rapidly since 1999, when the first commercial VSC- HVDC transmission installation was commissioned; the voltage -sourced converter technology has become the preferred option for transporting electricity when natural barriers are present (e.g. the sea), in Europe and further afield. At least one influential European body has recommended that the next step in the construction of the so-called European super grid, be a meshed HVDC transmission system based on the use of the VSC technology, to facilitate further the massive incorporation of renewable energy sources into the Pan European electrical grid, the harvesting of hydrocarbons that lie in deep sea waters and the energy trading between neighbouring countries.

It is in this context that this thesis contributes new knowledge to the modelling of VSC-based equipment and systems for the assessment of steady-state and transient stability analyses of AC/DC power networks. The STATCOM, the back-to -back VSC-HVDC link, the point-to-point VSC-HVDC link and the multi-terminal VSC- HVDC link, all receive research attention in this work. The new models emanating from this research capture all the key steady-state and dynamic characteristics of the equipment and network. This has required a paradigm shift in which the VSC equipment has been modelled, here-to-fore, assuming that a voltage-sourced converter behaves like an idealised voltage source. In contrast, the models developed in this research resort to an array of basic power systems elements, such as a phase-shifting transformer and an equivalent shunt susceptance, giving rise to a two-port circuit where the AC and DC sides of the VSCs are explicitly represented. The ensuing VSC model is fundamentally different from the voltage source model; it represents, in an aggregated manner, the array of semiconductor switches in the converter and its PWM control. The VSC model was used as the basic building block with which to develop all the VSC-base d devices put forward in this thesis. The ultimate device is the multiterminal VSC-HVDC system, which may comprise an arbitrary number of VSC units commensurate with the number of otherwise independent AC sub-networks and a DC network of an arbitrary topology. The steady -state and dynamic simulations of the AC/DC systems are carried out using a unified frame-of-reference which is amenable to the Newton-Raphson algorithm. This framework accommodates, quite naturally, the set of discretised differential equations arising from the synchronous generators, HVDC and FACTS equipment, and the algebraic equations describing the conventional transmission lines, transformers and loads of the AC sub-networks. The application areas covered in this work are: power-flow studies and dynamic simulations.