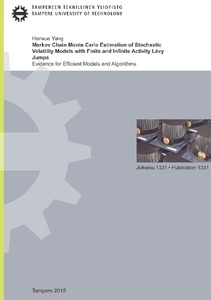 A financial model plays a key role in the valuation and risk management of financial derivatives, and it serves as an important tool for investors to measure the risk exposure of their portfolios and make predictions and decisions. However, the popular affine stochastic volatility models without jumps, such as the Heston model, have been questioned in the finance literature in terms of their appropriateness for modelling stock prices and pricing derivatives. Many alternative model specifications have been proposed in recent decades, including the specification of non-affine variance dynamics and the inclusion of Lévy jumps. However, the complexity introduced by further model specifications leads to poor probabilistic properties, and hence most popular estimation methods are not applicable. The Bayesian estimation method is among the few that work. In this thesis, I discuss the role of new model specifications and investigate the performance of Bayesian estimation methods.

First, I use an extensive empirical data set to study how the use of infinite-activity Lévy jumps in stock returns and variance improves model performance. The stock returns and variance are driven by diffusions and different Lévy jumps, including the finite-activity compound Poisson jump and infinite-activity Variance Gamma and Normal Inverse Gaussian (NIG) jumps. Moreover, the non-affine linear variance process is compared to the affine square-root stochastic process. With the conventional Markov Chain Monte Carlo (MCMC) algorithms, including the Gibbs sampler and Metropolis-Hastings (MH) methods, and the Damien-Wakefield-Walker method to cope with complicated posteriors, eighteen different model specifications are estimated using the joint information of the S&P 500 index and the VIX index for 1996 – 2009. There is clear evidence that in terms of the goodness of fit and option pricing performance, a relatively parsimonious model with infinite-activity NIG jumps in returns and non-affine variance dynamics is particularly competitive.

In the second part of the thesis, I examine the performance of advanced MCMC algorithms. The efficiency of the MH algorithm has been questioned because of its slow mixing speed, especially in the presence of high dimensions and a strong dependence between model parameters and state variables. Generally, a class of algorithms seeks to improve the MH by constructing more effective proposals, and another combines the MCMC with the Sequential Monte Carlo algorithms. To investigate, I first conduct simulation studies to compare the estimation performance of seven advanced Bayesian estimation methods against the MH. Specifically, I use the affine Heston model, the affine Bates model, and an affine model with NIG return jumps, and examine whether the different jump structures affect the estimation results. Second, I estimate the non-a ffine model with NIG return jumps using the joint information of the S&P 500 index and the VIX for 2002–2005 with selected algorithms that perform well in the simulation studies. The results of the simulation and empirical studies are mixed about the performance of the algorithms. The Fast Universal Self-tuned Sampler algorithms are particularly competitive in generating virtually independent samples and achieving the fastest mixing with a fixed number of MCMC runs, and their performance is stable regardless of the model specifications. However, they are computationally expensive. The computational costs of the Particle Markov Chain Monte Carlo (PMCMC) methods are much cheaper and also efficient in mixing, and they perform best when estimating the models without jumps/with NIG jumps in the simulation studies, as well as in the fit to the VIX in the empirical studies. However, the PMCMC methods are more vulnerable to model specifications than the other algorithms; in particular, the rare large compound Poisson jumps in the Bates model significantly reduce the acceptance rate and worsen the estimation performance of the PMCMC methods.