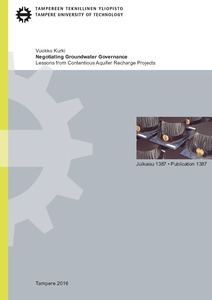 Groundwater is an invaluable part of our natural, built, and socio-economic environments. In global context, groundwater is the largest freshwater resource: almost half of all drinking water is abstracted from underground. During the last few decades, Finnish community water supply has increasingly relied on natural and artificially recharged groundwater as raw water source. Currently, their combined share of the water supplied is some 66 percent, out of which 16 percent is artificially recharged. However, potential groundwater areas and places for groundwater recharge are sparsely situated. Thus, large city centres, with their increasing need for fresh water supply, are obliged to withdraw groundwater from afar, often crossing municipal borders. This may cause tensions between different jurisdictional units; generally, between rural and urban areas. This research illustrates how cooperation between municipalities can turn into a conflict. Indeed, there are several examples of local conflicts around the inter-municipal groundwater projects in Finland. Many projects which are justified on both technical and economic grounds have problems in gaining legitimacy among local inhabitants. Oppositions emerge and projects may go through long litigation processes.

A contentious groundwater project can be classified as a complex management problem: it is unpredictable, uncontrollable, and it has several, often contradictory interpretations. Therefore, conventional groundwater management approaches, drawing from expert-based instrumental rationality, often are insufficient for successful project planning and implementation. Indeed, the emerging paradigm emphasizes collaborative approaches to complex management problems in the fields of natural resources management as well as urban planning. Water services (water supply, wastewater treatment, and storm water management) are inherently bound to these fields through their multiple connections with aquatic environment, required technical infrastructures, and influence on socio-economic development.

The main objective of this study was to find new perspectives for groundwater governance by analysing contentious cases that operate in field of water services, thus connecting the contexts of natural resources management and urban planning. Accordingly, the research problem was formulated as follows: Which are the major constraints in large scale groundwater projects from the perspective of collaborative governance, and what lessons can be drawn for future collaboration?

The research problem was addressed through negotiation theory and discursive framework which adhere to social constructionist tradition. Through these theoretical and methodological considerations, this study enclosed conflict analysis and discourse analysis. These methods were exploited in a comprehensive analysis of the two case studies where inter-municipal water supply projects, based on the managed aquifer recharge (MAR) technology, were contested by local inhabitants. First case is situated to southwestern coastal area of Turku Region. It started already in the 1970s as a long-distance water transfer project, and was finalized in 2010 when an MAR plant started to operate on the esker of Virttaankangas. However, the other case, situated to Tampere Region, started in 1993, and the process is still unfinished.

The results of this study indicate that the water management sector is strongly grounded on instrumental rationality when solely expert knowledge is considered as a legitimate source of information. Accordingly, planning and management of the MAR projects concentrated mainly on the visible tip of an iceberg, instead of managing the whole. The interaction between parties was based on competitive mindset and zero-sum game; thus, the underlying interests and the complexity of the project were not recognized. Strong positions were taken, which precluded the possibility of finding mutual gains.

Although cases involved some collaborative efforts, they were used only as casual tools without really relying on collaborative rationality. However, in groundwater governance it should be other way round: the core should be in collaborative rationality while some of the tools can be obtained from rationalistic expert-based planning. Thus, legitimacy for the project should be gained through joint knowledge production as well as interaction, where addressing stakeholders’ interests instead of predefined goals could help in finding mutual gains and creative new options for collaboration. Furthermore, in this process, water managers and experts should be more like facilitators than holders of the only legitimate source of knowledge and the stakeholders like partners rather than informants or adversaries.