Quenching and Partitioning of High-Aluminum Steels 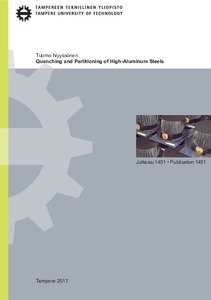 The quenching and partitioning response of aluminum-containing steels was investigated primarily through dilatometry and microstructural analysis through electron backscatter diffraction. It was found that 2-3 wt-% aluminum content raises the Ac3 temperature to levels that cannot be predicted by current thermodynamic models. New information was gained on the nucleation and austenite growth behavior of high-aluminum steels during intercritical annealing. The exact orientation relationship between intercritical austenite and ferrite for high-aluminum steels was also determined.

Quenching the material from an intercritically annealed state into temperatures between Ms and Mf results in a partially complete martensitic transformation, after which the steel can be partitioned at 450 ◦C for extended periods with no excessive austenite decomposition, resulting instead in the migration of the supersaturated carbon from the martensite to the austenite phase, stabilizing it to room temperature. The resulting microstructure has a comparable strength to a corresponding dual-phase steel microstructure with an improved uniform elongation. It was found that the microstructure is very sensitive to heating rate and intercritical annealing conditions, necessitating good process control during initial annealing.

A fully automated iterative algorithm was developed for the reconstruction of austenite orientation maps from electron backscatter diffraction data. The algorithm determines the correct orientation relationship from the boundary misorientations between martensitic blocks. The determined orientation relationship is then used to assemble a graph cluster from the boundary misorientations, which is then divided into discrete clusters using Markov cluster analysis. The austenite orientation map can ﬁnally be reconstructed from the resulting discrete cluster network. The method is fast, can be used for the automatic analysis of datasets measured with both ﬁne and coarse step sizes and is suitable for previously challenging microstructures, such as fully bainitic or partially martensitic-bainitic microstructures.

In this work, the developed algorithm was used to analyze the intercritical austenite-ferrite microstructure reconstructed from the EBSD data of quenched, intercritically annealed steel. It was found that the austenite nucleates after the recrystallization of ferrite on the ferrite grain boundaries, typically sharing a Kurdjumov-Sachs-type grain boundary with one or more neighboring ferrite grains. The orientation relationship between the intercritical ferrite and austenite could be measured accurately from the reconstructed data. The reconstruction also gave direct access to the intercritical austenite grain size and the phase fractions. It was found that the nucleation of austenite is relatively fast, after which austenite grain growth occurs primarily through slow reconstructive interfacial growth into the direction of ferritic grains with incoherent phase boundaries with the growing austenite.