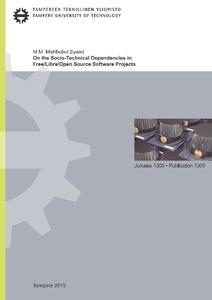 During the course of the past two decades, Open Source Software (OSS) development model has lead to a number of projects which have produced software that rivals and in some cases even exceeds the scale and quality of the traditional software projects. Among others, Eclipse, Apache, Linux, and BSD operating system are representative examples of such success stories.

However, OSS project like traditional in-house projects, often pose the potential for enormous problems, whose effects run the gamut from immense cumulative delay through complete breakdown and failure. This situation is evident, as OSS development is a socio-technical endeavor and is non-trivial. Such development occurs within an intensively collaborative process, in which technical prowess must go hand in hand with the efficient coordination and management of a large number of social, inter-personal interactions across the development organization. Furthermore, those social and technical dimensions are not orthogonal. It has been recognized that the structure of a software product and the layout of the development organization working on that product correlate.

Therefore this thesis argue that a comprehensive understanding on the sustainable evolution of OSS projects can be gained through the examination of the mutual influence of social and technical dimensions in OSS development. Thus, the goal of this thesis is the verification and reasoning of the following proposition,

“The evolution of the Open Source Software (OSS) project is constrained by the non-orthogonal evolution of Social and Technical dimensions (often termed as Socio-Technical dependency) of such projects”.

In concrete terms, this thesis investigates and measures empirically the extent to which the two dimensions of OSS projects, social and technical, approximate and influence each other during the evolution of the projects. Perceived insight is then used to build proposals that would provide empirical basis to frame theory around the affirmed proposition.

Moving towards this goal, this thesis proposes models, methods, frameworks and tool supports to measure, assess, and reason the socio-technical dependency within OSS project context. The starting point is to propose a data model to mimic the social and technical dimensions and their inter-relationships. This model is instantiated through the repository data of OSS projects that represent each of these dimensions. Then, methods and a mathematical model are proposed to derive dependency between the two dimensions, and to utilize them in measuring socio-technical dependency quantitatively. These proposals are then put into practice within distinct OSS project contexts to empirically measure and investigate socio-technical dependency. Along the process, frameworks, architectural design and corresponding tool implementations are provided to automate the analysis and visualization of such dependency.

Reported results suggest that high degree of socio-technical congruence can be considered as the implicit underlying principle for building team collaboration and coordination within the developer community of long lived OSS projects. Even being highly distributed community of developers, and mostly using passive communication channels, OSS communities are tied together by maintaining task dependent communication. Such communication is often ad-hoc, adaptive and situated as it cope with rapid and continuous changes in the underlying software.

Additionally, collaboration among projects are significantly influenced by the resembling properties among the projects. Resembling properties (e.g., project domain, size, and programming language) often form a favorable ground, thus creating a stimuli for developers to participate in those projects.