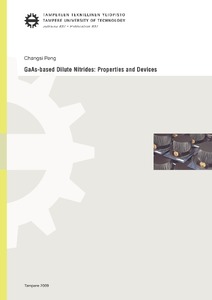 It is well-known that a small amount of nitrogen in InGaAs / GaAs quantum wells (QWs) causes a bandgap-bowing effect in the electronic band structure. While widening the spectral range of GaAs is a much desired consequence of bandgap-bowing, the presence of nitrogen tends to deteriorate photoluminescence (PL) intensity and widens the PL line width because of generation of non-radiative crystal defects. To increase the PL efficiency, one must apply post-growth thermal annealing. However, heat treatment causes a blue shift (BS) of emission, due to atomic diffusion across the interfaces of layers and due to other phenomena. When alloying nitrogen with InGaAs, growth temperature (Tg) need to be lower than what is normally used for growth of InGaAs. Low Tg creates point defects and complexes. These are major reasons for diffusion of atoms. The BS is also caused by local atomic redistribution (short range ordering) that takes place during annealing.
In this thesis, I shall study mechanisms which induce the BS. It was found that post-growth annealing drastically affected material properties and performance features of dilute nitride lasers, but left InGaAs / GaAs almost intact. We found that low-temperature treatment reduced absorption losses, while high-temperature treatment improved the conductivity of the AlGaAs “cladding” layers. Post-growth annealing also influenced burn-in behavior of lasers.
Solubility of nitrogen in InGaAs is quite limited because of a large miscibility gap in InGaAsN, which makes it difficult (and not desired) incorporate much N into InGaAs to form a flawless substitutional random alloy. We carried out a series of experiments to explore appropriate growth conditions and developed layer structures that we deem closely optimized because they produced good PL intensity in the range of fiber optical telecommunications. The developed layer structures included strain-compensating GaAsN layers (SCLs) and diffusion-suppressing InGaAsN layers (DSLs). The GaAsN SCLs reduced strain in the active region, preventing lattice relaxation, and provided type-II band alignment for enhanced hole confinement in the QW. The DSLs suppressed group-III interdiffusion between InGaAsN and GaAs(N) and smoothened the InGaAsN / GaAs(N) interfaces. All heterostructures were grown by molecular beam epitaxy.
I shall also discuss major performance features of the dilute nitride lasers.