Effects of the Human Body on Single-Layer Wearable Antennas 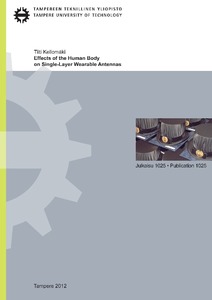 The effect of the human body on wearable off-body communication antennas is studied in the frequency range from 100 MHz to 2.5 GHz. Special emphasis is on single-layer structures, with metallisation in one layer only. In particular, the effect of the antenna--body-separation distance is studied extensively. The results are based on measurements of fabricated antennas worn by human subjects, as well as measurement and simulation results available in the literature.

A transition region is found between 200 and 500 MHz. Below this region, the posture and size of the human body are the key parameters to determine the resonant frequency of the antenna. Because the body is thin compared to the penetration depth, the radiation pattern of a body-worn antenna can be omnidirectional since the body does not shadow the backwards radiation.

Above the transition region, the body size and posture and the placement of the antenna on the body do not affect the input impedance or the resonant frequency, but the key parameter to determine the performance is the antenna--body-separation. The radiation pattern always includes a deep null because the radiation cannot penetrate the body.

To ease the comparison of different wearable antenna structures, new figures of merit are proposed: Detuning percentage gives the relative difference of the centre frequencies between the body-worn and the free-space case. Usable bandwidth describes the frequency band that fulfills certain specifications in all use conditions. Crossover distance indicates the distance where the forward gain on-body equals the free-space gain--a small crossover distance indicates that the antenna is well suited for body-worn use.

As a rule of thumb, the user should be kept at a minimum distance of wavelength/(2*pi) from a wearable single-layer antenna. At this distance, the input impedance and forward gain equal their free-space values, and the body-worn efficiency is between 60% and 80%. The reflection from the body can be utilised to increase the forward gain especially above 2 GHz. Single-layer topologies with quickly decaying near-fields should be preferred to dipole-like structures.

It is concluded that, contrary to common belief, both single- and multilayer antenna topologies are feasible as wearable antennas. Both approaches should be considered when the antenna topology for a wearable system is selected. Single-layer antennas are especially useful in situations where the size of the antenna is restricted.