Automated cell cultivation on a well-plate 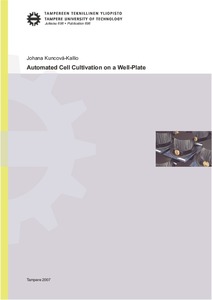 This thesis proposes a novel original system for cell cultivation of adherent cells. The system addresses the standardization demands posed by the future trends to move to difficult-to-culture cells, offers repeatable high-content screening testing, and ensures the compatibility of data for future data mining for systems biology purposes. The proposed system is based on a standardized platform the well plate, which allows for validation (for instance using fluorescence) with current systems and reduces market resistance towards novel platforms.


The proposed system is analyzed firstly in the functional level and then in the component level. The key component is a functional lid that addresses each of the wells with individual stream of medium inflow and outflow. This enables individual environmental control in each of the wells. Due to predictable disturbances and experiment-specific demands, the system cannot ensure the environmental conditions in an open-loop. Therefore, a set of sensors has to be incorporated. There have been research efforts for sensor implementation directly into the wells. However, such a solution does not satisfy the standard well-plate requirement and more importantly, obstructs the observation area for microscopy/fluorescence studies. The author proposes a soft-sensing approach, where the sensors are placed into the microchannel network and thus, the well-plate remains fully untouched by the system.


The main functions of the proposed system are heating, oxygenation and perfusion. Typical heating approaches include the hot air used by incubators or heating plates used during microscopy. Also here, the proposed system is inspired by nature, using the growth medium as the heat transport medium, which is a parallel to the blood circulation system. The oxygenation utilizes the superb permeability of poly(dimethylsiloxane), which is suggested as a suitable material for the functional lid. Two proposals of perfusion system approaches are suggested.


The assessment of the proposed system brings up several challenging areas, which can be regarded as minor risks to the successful realization of the proposed cell cultivation system. They are solvable through optimization and re-design. However, there are also some major risks, which could lead to failure of the whole idea. These major risks include the suitability of the material, the heating demand versus the shear stress on cells and the temperature homogeneity within a well. The thesis focuses on these major risks and assesses them using literature surveys and wet-lab experiments.


A test bench based on a standardized 12-well plate equipped with 9 temperature sensors in a single well was developed for testing purposes. It has been shown that in a 12-well plate system, the working volume has to be at least 1,5 ml per well in order to ensure homogeneity of the temperature distribution on the bottom of the well and to even out possible sudden temperature changes.


From the hardware point of view, a dripping input (as opposed to an immersed input) has more predictable behavior and improves the temperature distribution and therefore, is the preferred choice for the proposed system.


Poly(dimethylsiloxane) (PDMS) as the material of choice is assessed in terms of its processability as well as physical and chemical properties from the cell cultivation point of view. The critical chemical properties are further studied in wet-lab experiments. An experiment with fluorescent dye proves that native PDMS exhibits non-specific binding. The PDMS exhibited a negative weight change after immersion in the culturing medium. However, the high-performance liquid chromatography-size exclusion chromatography (HPLC-SEC) study has shown no foreign or missing components in the growth medium at given wavelengths. Given that the medium will be continuously supplied, the empty surface sites will be shortly saturated and further adsorption can take place only with compounds of stronger affinity to the surface. Despite these findings, the negative properties of PDMS are outweighed by its advantageous properties for cell cultivation. These include biocompatibility, non-toxicity, optical transparency, non-fluorescence, easy sterilization, and gas permeability.


As a summary, the results of the performed analyses and experiments ensure the feasibility of the proposed system.