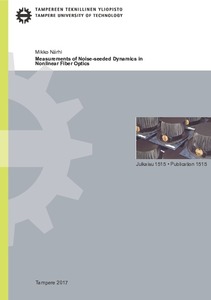 Nonlinear physical systems are ubiquitous in nature - formation of sand dunes, currents occuring in a rapidly ﬂowing river or a simple double rod pedulum are just a few examples from everyday life. Studying and understanding these systems has interested scientists for decades. Because these nonlinear systems might be chaotic, measurements of such systems need to be performed on a real-time basis and by statistical analysis methods.

The propagation of short and intense pulses in optical ﬁbers are another well-known example of nonlinear systems. However, the rapid ﬂuctuations of optical ﬁelds has prohibited studying these systems on a real-time basis, until recent years. This thesis demonstrates the use of state-of-the-art real-time measurement techniques to capture the stochastic dynamics of noise-seeded nonlinear processes in optical ﬁbers allowing for novel insights and interpretation within analytical frameworks.

By combining real-time temporal and spectral measurements unforeseen details of transition dynamics of a mode-locking of a ﬁber laser are also reported. The simultaneous spectro-temporal acquisition allows for complete electric ﬁeld reconstruction with numerical algorithms, which has not been possible before at megahertz repetition rates with sub-picosecond and sub-nanometer resolutions demonstrated here.

Supercontinuum generation is one of the most well-known examples of nonlinear ﬁber optics that is also becoming widely spread in applications. The details of the complex and noise driven dynamics are now well-known, but the connection of the stability of such light sources with traditional coherence theory was only derived recently. Experimental measurement of supercontinuum stability in the framework of second-order coherence theory is demonstrated, ﬁlling a gap in characterization of non-stationary light sources.

Finally, an application of supercontinuum generation is proposed in terms of all-optical signal ampliﬁcation. This is based on the inherently sensitive nature of the nonlinear process to any input ﬂuctuations. The potential of such a highly nonlinear system for a practical application is demonstrated and the underlying dynamics leading to this sensitivity are explained.