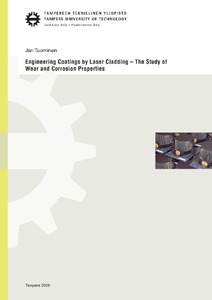 In the field of surface engineering, laser cladding is an emerging coating method with the quality of high energy density, which enables the production of low diluted and fusion bonded thick metallic coatings on wide variety of metallic base materials with low total heat input. Besides applications where the coating should be deposited on tightly restricted small areas, laser cladding has gained popularity in coating and repair of larger surfaces in massive high value components. However, due to high capital costs and low productivity resulting from the limited amount of power available and low process energy efficiency due to the nature of optical energy, conventional coating methods under constant development are still dominating in many industrial applications. In order to compete with the conventional coating methods, orders of magnitude higher capital costs of lasers and related accessories should be justified/offset by the superiority of the coating quality, extended lifetime of the clad components and/or higher productivity and coating material efficiency.

For that purpose, this thesis studies some essential functional properties of various metallic and metal matrix composite (MMC) coatings produced by modern short-wavelength Neodymium:yttrium-aluminium-garnet (Nd:YAG) and direct high power diode laser (HPDL) cladding techniques. Coatings comprise commercial alloys, which are already familiar and well-established in various engineering applications, as well as novel experimental type alloys, which are rarely studied in the context of laser cladding. Properties of coatings are compared with coatings produced by such rival coating techniques as high-velocity oxy-fuel (HVOF) spraying and plasma transferred arc (PTA) surfacing. Selected wrought, sintered, cast and hot isostatic pressed (HIP) bulk alloys are also used as reference materials. Characterisation and testing of coatings include wet corrosion, hot corrosion, high temperature stability, abrasive wear, sliding wear, residual stresses and thermal fatigue. In order to understand and explain the differences in the behaviour between different coating materials and coating methods, microstructures of the coatings are characterised in details. In addition to coating characterisation, back reflection is studied with novel HPDL cladding process since this area is still rather unknown and critical in developing novel laser sources for cladding and rapid three-dimensional (3D) manufacturing applications.

Determination of back reflection implemented by temperature measurements conducted on several locations in the vicinity of the optics and inside the diode laser head indicated that back reflection from the melt pool and base material towards the laser head exists despite rather long working distance and efficiently absorbed short-wavelength laser beam. This appears particularly intensive during the cladding of single beads where overlapping is not used. The direction of back reflection is dictated by the angle between the surface of the melt pool and incident laser beam, which in turn is influenced by the height of coating layer and tilting angle of laser head. The latter can be adjusted accordingly to avoid harmful back reflection to the critical parts inside the laser head.

In wet corrosion studies in neutral chloride bearing aqueous solution at room temperature (RT), laser cladding process proved to produce impervious Ni-, Cr- and Co-based metallic corrosion barrier coatings, which isolated the less noble base materials completely from the surrounding environment. Inhomogeneous distribution of alloying elements in macro- and micro-level, however, led to preferentially dissolved regions, which were not detected in corresponding wrought alloy. Limited amount of intermixed Fe from the base material characteristics for laser coatings had useful effect on pitting and crevice corrosion resistance. Distribution of alloying elements in macro- and micro-level together with the amount of dilution dictated how the laser coatings related to the corresponding wrought alloy. By careful control of these characteristics, corrosion properties equivalent to wrought alloy could be obtained.